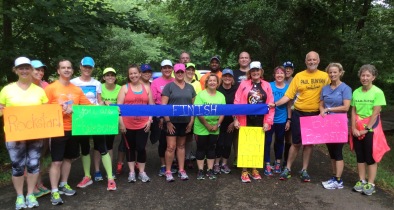 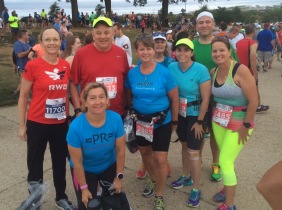 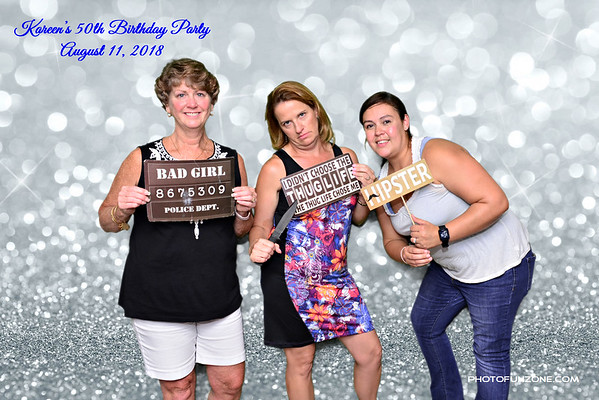 I started running about 17 years ago to help with weight loss. Most of those runs were solitary runs. At the time, none of my friends ran and I was not aware of any groups to join. For the next 10 years, I ran off and on. Sometimes I would stop for a few weeks and other times I would stop for a few years. I never even considered a race until January of 2012 when I was inspired by my daughter who ran XC and track for Lake Braddock. After surviving my first race I was hooked and decided to do one race a month. For most of these early races, my husband ran with me, but after urging from a friend, in September of that year I decided to join the 101 program at Potomac River Running in Burke. I was terrified to get started, but my daughter had just left for college and I was ready to branch out and meet some new people. Little did I know what a life altering decision signing up for that program would be!

I was immediately hooked on the people and the different workouts which helped improve my running immensely. Over time, many of these people have become a second family to me. They are the people I go to when I want to celebrate and they are the people I go to when I need a shoulder to cry on or words of encouragement. They have supported me through the first years of being an empty nester and gave me encouragement to make a job change that I had been contemplating for years. Two of these amazing people sat by my side at the funeral of a dear friend who they didn’t really know, but they came anyway because they knew I needed them. Most importantly, my =PR=running family gave me the confidence to get certified and start coaching others.

Other than taking the plunge and marrying my husband, no other decision I have made has had a greater impact on me. I’m fitter and healthier than I ever was when I was younger. I am happier and more confident and I have an extended family that I would not give up for anything! My “Best Running Family” is always expanding and for that I am grateful. You can never have too much family, right?